The Dufour family’s history has been linked to tourism and winter sports since as early as 1870.  In the 1930s Louis’ son, Éric, an engineer and avid ski touring fan, developed and marketed a canvas rescue sled. Thanks to its skis and poles, the “Gaillard-Dufour” sled was able to transport injured people. Alongside his father, Éric developed the production of non-slip skins, and later adhesive skins, as well as many other mountain accessories. The Pomoca brand was officially trademarked in 1937. 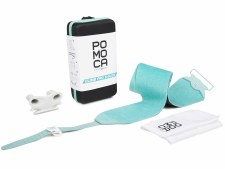